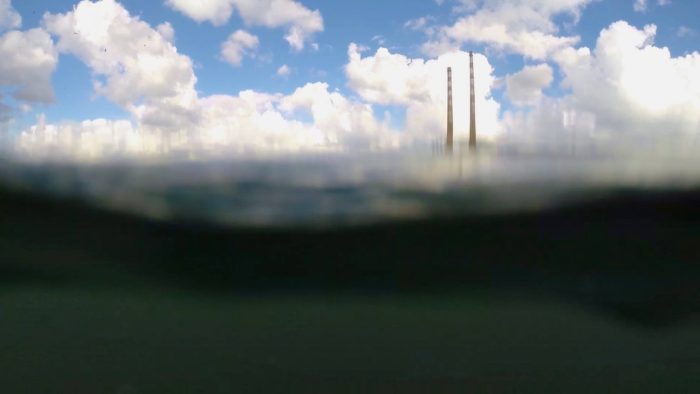 This project explored the Lower Liffey, Docklands and the South Wall from a swimmer’s embodied viewpoint. With the many changes happening in the Docklands area, this swim was seen as a celebration of the swimming, rowing and aquatic traditions in Ringsend, and also a way to film and document the harbour and the wall in it’s current state from a unique perspective. 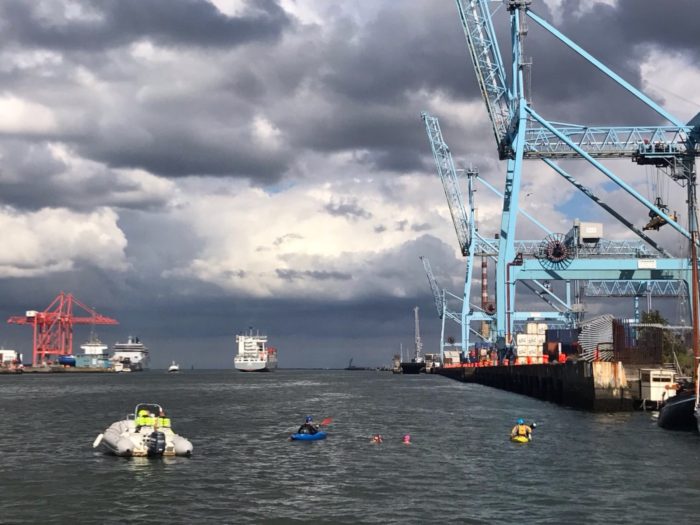 The South Wall Swim was a 6.3 km swim journey undertaken by a selected group of swimmers who swam relay style* from St Patrick’s Rowing Club by East-link Bridge around the Poolbeg Lighthouse and up to the Half Moon Swimming Club, the swim connecting these historic water based clubs through this journey. 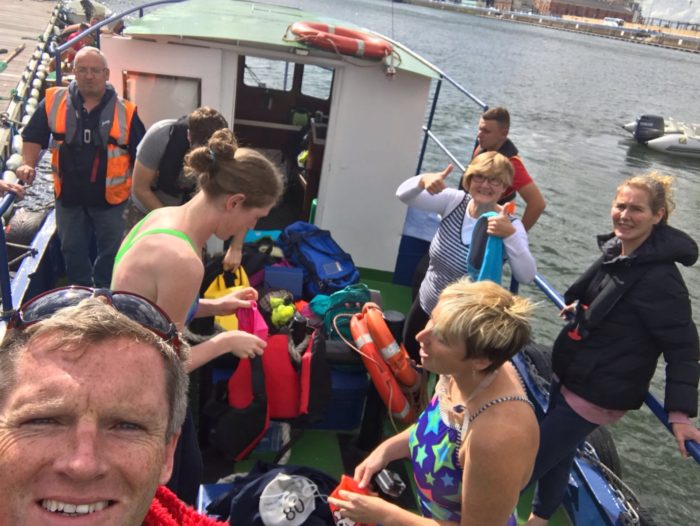 I’ve been searching for people to swim with and stories of swimming activities in the Docklands area from the Toll Bridge round to the Shelley Banks. I was told that “Most of the children from Ringsend are related to the river in some shape or form” and this has become very apparent the more I talk to people from the area about their special relationship with the Liffey and the Irish Sea. 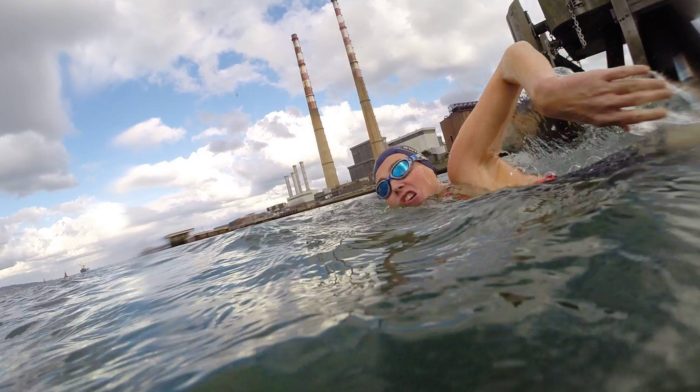 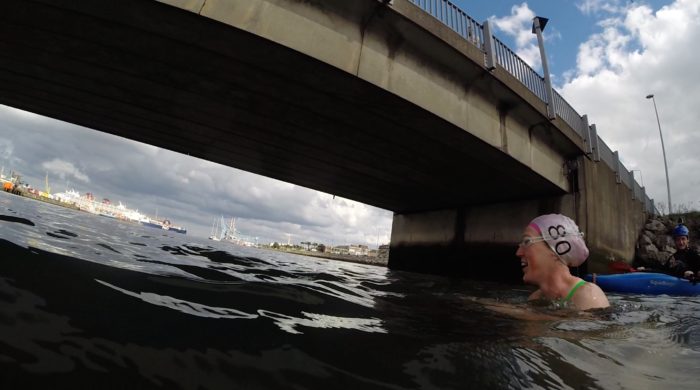 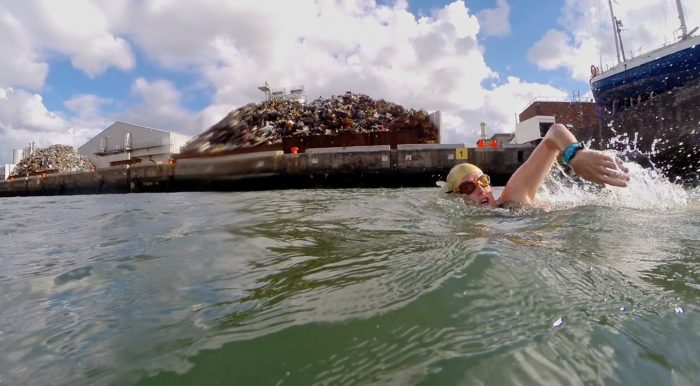 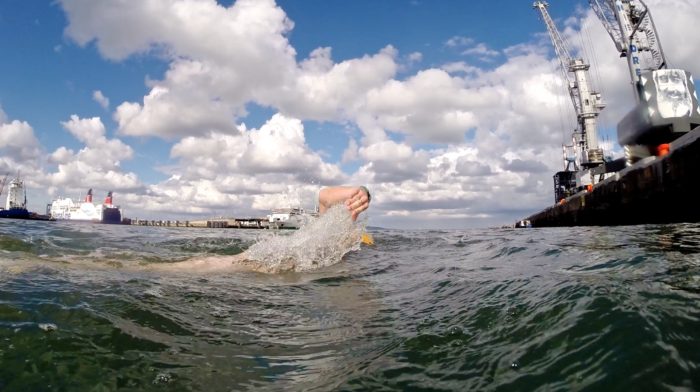 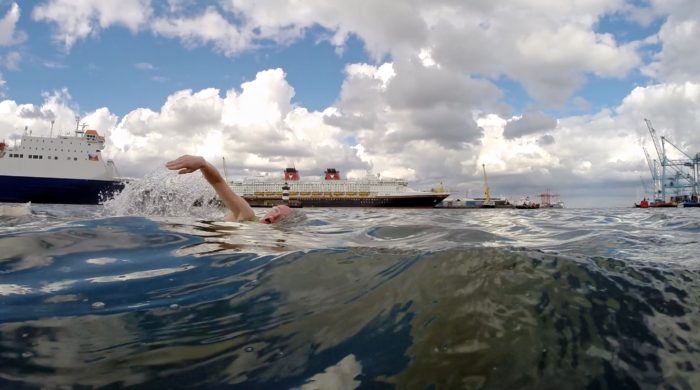 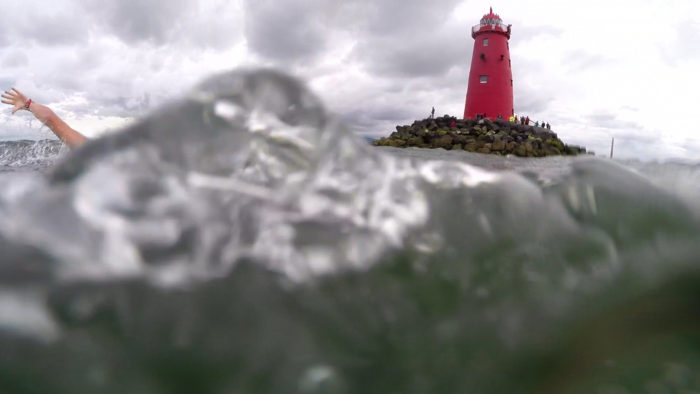 As part of the ‘The South Wall Swim’ there was an audio and film art installation, at the Half Moon Swimming Club on the South Wall. This include my research from talking to swimmers in the Docklands area and the screening of the archive film “The Moon Men” 1965 lent to the project by the Irish Film Institute. 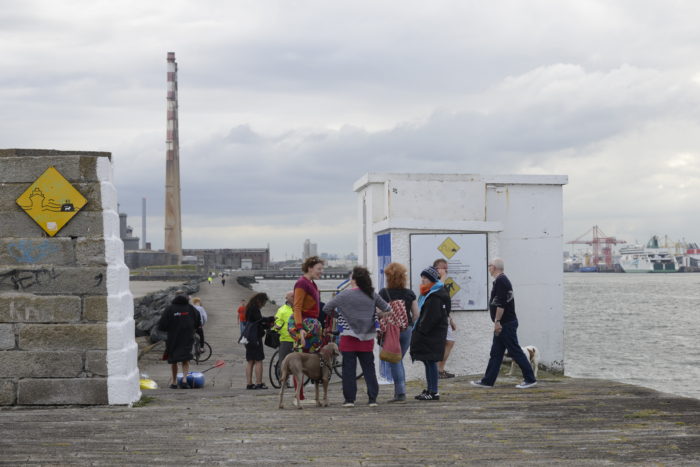 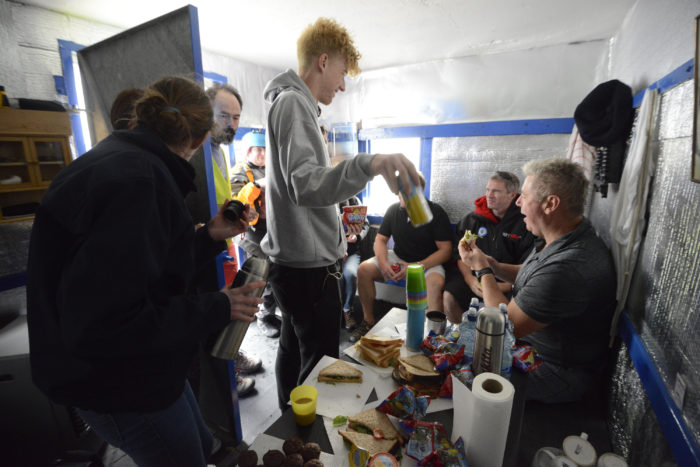 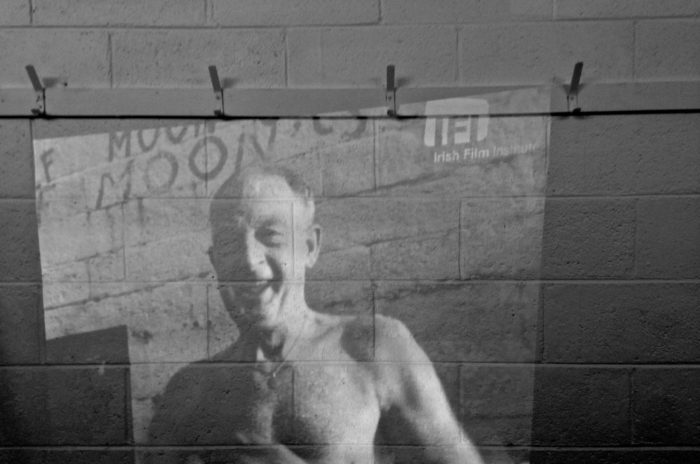 During the winter months it was just myself, Pakie and Barry sea swimming at the Half Moon on the South Wall, watched over by Percy, Billo and Derek who meet at the ‘Man Shed’ on the wall everyday for tea, chats and occasional swimming. But now the summer is nearly here and the rowing boats are all back on the water and the sea swimmers are starting to visit the Half Moon again. 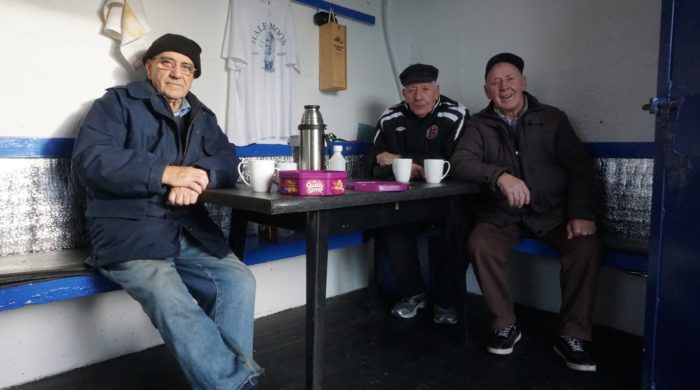 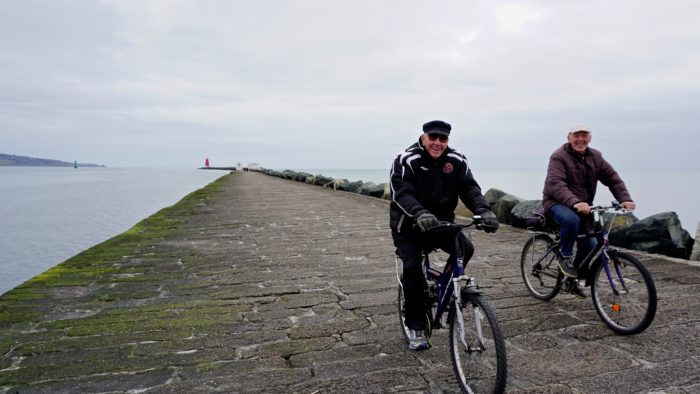 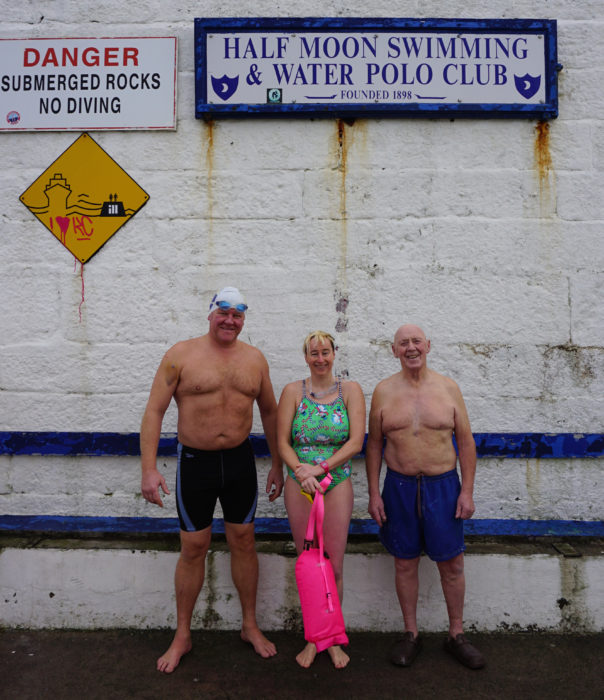 * Relay Style Swim – this swim is loosely based on English Channel Swimming team relay rules. The swimmers will swim one at a time for a given amount of time, and then the next swimmer will take over. This is repeated until we reach our destination.

Below are photos taken while researching over the past few months including a visit to the Ringsend Water Treatment Plant, swimming at the Half Moon, painting the club house with the Half Mooners, rowing with St Patricks’ Rowing Club and the Currach Club. 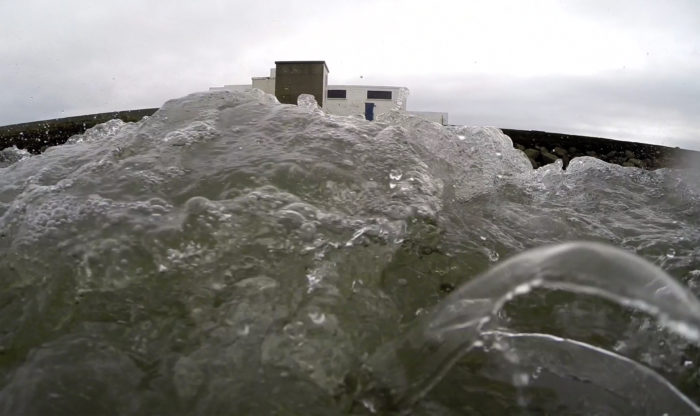 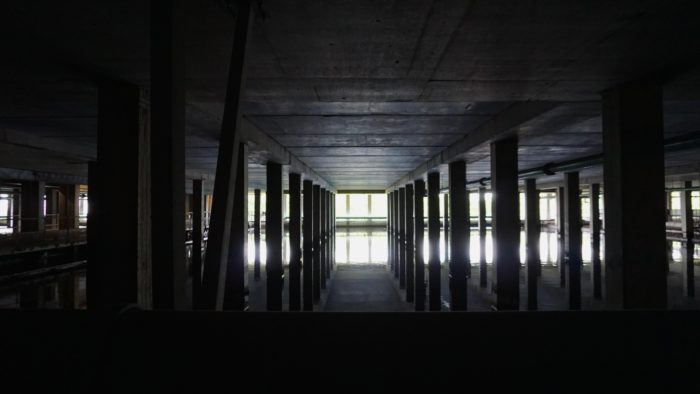 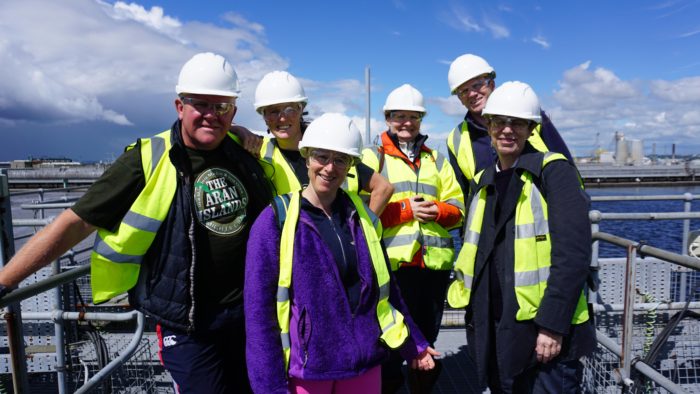 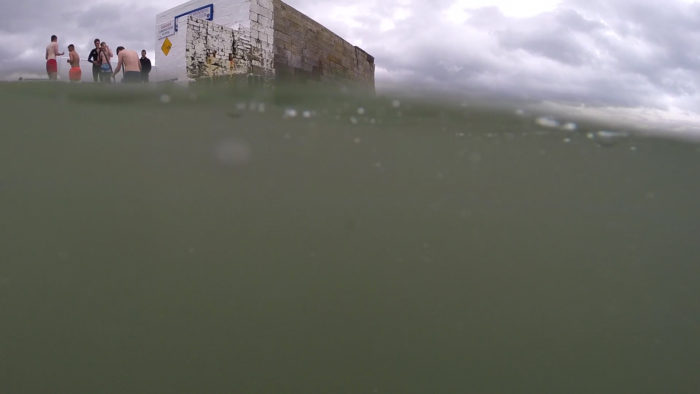 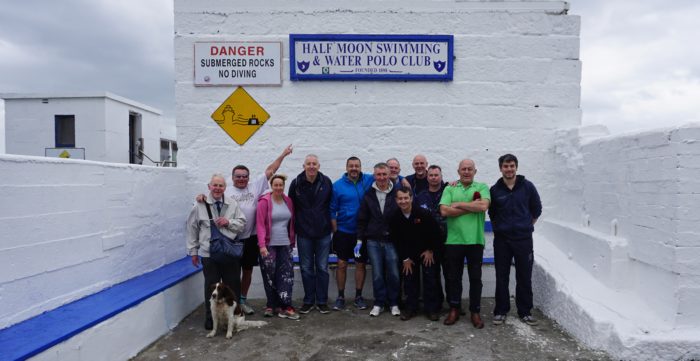 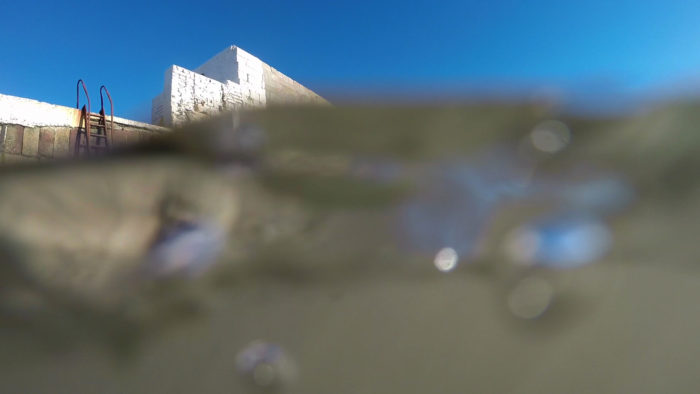 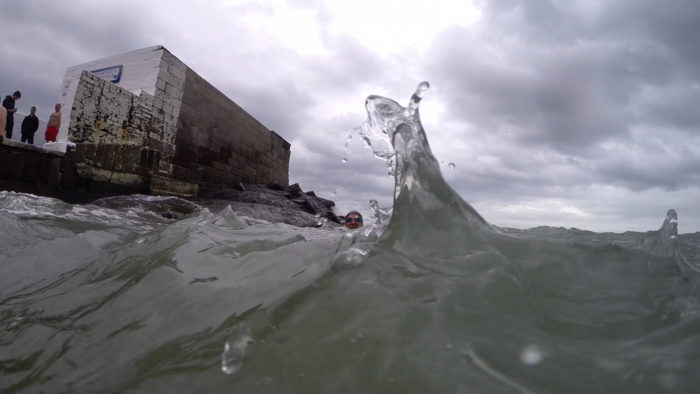 Below a drawing of the South Wall.