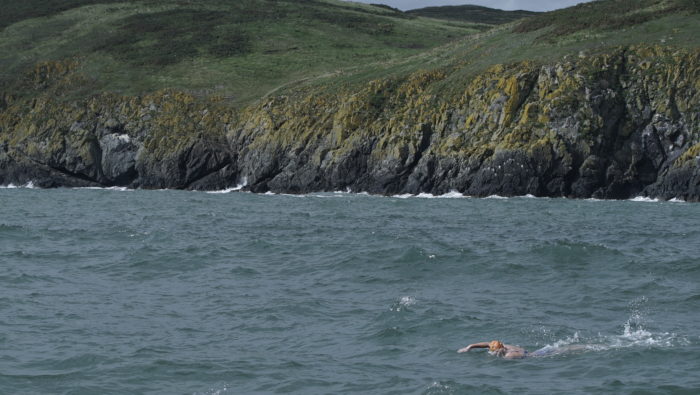 On September 6th 2016, I swam around Lambay Island as the final swim in a trilogy of swims to, about and around Lambay in Dublin Bay.

When the tide starts to ebb down the Irish Sea it hits the top of Lambay Island. Lambay is a big mound of volcanic rock in the ocean and the water has to separate and flow around it.

The distance was 8.2k and it took me 3.17 hours. I had decided to set out from Sunk Island on the south east corner and avail of the flowing tide up and around to the north west corner. Then to swim along the north side where Lambay splits the ebbing tide and to try to catch this to push me clockwise down back towards Sunk Island. The tide was 3.71m. The later in the year the trickier it is to get enough daylight hours, a clam tides and good weather. 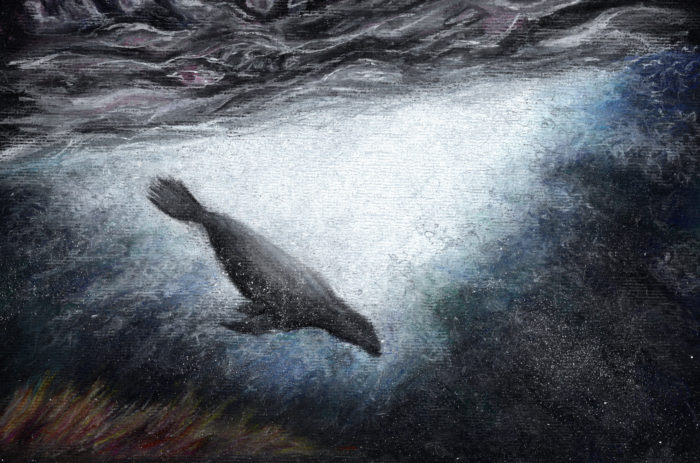 Sunk Island
Nervous.
Sitting on the boat in my togs, goggles and hat with a jacket wrapped around my shoulders I quietly watch the team struggle trying to launch the red kayak over the side of Naomi Leigh the support boat.
This swim may not go ahead.
Strong winds over tide meant that the sea was too rough to launch at Sunk Island.
After a few attempts Jimmy the pilot took us west around to Talbot’s Bay where it was more sheltered and we started from there.

Talbot’s Bay
I jump in.
I try to clear my head of all the worry and doubt and focus on swimming. With Teena in her red kayak beside me and Fergal looking after me from the support boat I feel safe, I don’t want to let them down.
The first half hour or so you warm up and try to find a rhythm, the water felt cold, it always does, I decided to ignore that fact.

The support boat gave a wide circle of Burren Rocks leaving myself and Teena to get into our stride alone and work our way to the harbour mouth.
I glance to Lambay and the buildings on the right, no one was around.
Not long after the harbour I got stung by a Lionsmane Jellyfish.
Jumps, panic, dread of how many more there could be. Can I handle continual stings?
It was a beautiful, electrifying moment, the view from your goggles is filled with swaying iridescent tentacles, and then like a Siren, boom they get you. I saw several other Lionsmane but they were far below me as I swam. Conscious that the best cure for jellyfish stings is sea water I just had to just get on with it and keep swimming.

Tailor’s Rocks can be dangerous for boats so the support boat went around the beacon on the north west of Lambay, myself and Teena sticking close to the island. I made it to Scotch Point in 57 minutes, I had wanted to get to Scotch Point within two hours, if I had been any later it would have been much harder to swim as the tide would have turned. Here I took my 1st feed of 250ml of Citrus High Five.
Got to drink it all or Fergal will kill me.
The water felt a bit tough going around the west corner, I hoped I had the tides worked out correctly and would meet that split where the ebb would help me all the way home.

Then we journeyed across Saltpan Bay where the water felt slow but there were no waves all the way to Kelly’s Rock. Around the Harp Ear is Freshwater Bay and that is where the seals live. The seals in Dublin Bay are Grey Seals and the Common (or Harbour) Seal and they live in abundance around the back of Lambay Island. One seal followed me for a long time and there were groups all around me jumping and splashing water. I had to convince myself that this was all friendly and curious. One seal came up close to me, we had a small chat, there was a shared moment.
I took a second feed just before Carrickdorish, a name given to a group of rocks just off Lambay, the support boat had to go around the outside of the rocks. Myself and Teena swam through the gap which was only about 10m wide and full of seals, a condensed body of water and seals.

I was now counting the bays trying to remember the names and to work out where The Nose was as after this point the sea would be very lively all the way back.
Turning around the north west corner at The Nose it all looked very daunting. In the water your sense of dimension and scale is distorted, everything looks and feels so much more dramatic and further away. There were white caps as far as I could see.
I tread water and try to catch my breath – how will I swim through that?
After a few moments I manage to put my head down and push through. I started to enjoy the feeling of madness and power from the water surrounding me, I became fluid swimming through it. I was thinking of Teena in her kayak, some of the waves were 2m high and we would both disappear into large troughs, both of us were quietly apprehensive but neither of us wanted to alarm the other, I still felt safe knowing she was near me.

Tayleur’s Bay is one of the largest bays on Lambay and where the RMS Tayleur hit rocks in 1854. I briefly looked right to the rocks to where this collision happened, but I had to concentrate on how I was going to be able to swim through this endless mess of chop, swell and waves.

When we got to Sunk Island the original starting point I knew I still had a few bays to swim past to make the circumnavigation of the island complete. Teena managed to give me a third feed, which I didn’t really drink much of and a bite of a banana.

Catherine jumped in to join me as a support swimmer for the last stretch from Bishop’s Bay with a bag of Jelly Babies, her graceful, effortless and confident stroke instantly cheering me along.
Relief and happiness.
The waves were pushing me towards the rocks, I wasn’t as strong swimming at this stage and Catherine continually herded me away from them like a sheepdog. Around Black Point I could see Talbot’s Bay across from Carnona Bay and knew the end was in sight and achievable. About 300m towards the end I noticed Teena and the red kayak weren’t next to us anymore. Catherine told me she was getting a drink from the boat, but I did become a bit suspicious when she didn’t return. I knew if something had happened we would have been alerted by the support boat.
She had capsized. In a moment of relaxation when we had moved on from the worst of the waves, a freak wave caught her off guard and tipped her in. It was still too rough to try to re-enter a kayak from the sea so she swam her kayak and paddles to the support boat with help from Fergal.

When I reached Talbot’s Bay the team jumped in and swam over to celebrate. What a swim. What a team.
Did I just swim around Lambay Island?
How do you manage to do something that had once seemed beyond you?
What makes you keep going?

A short sound piece of while I was researching the tidal flow and waters around Lambay for this project.

Thanks to Eileen Murphy and Sean Pierce from Shearwater Sea Kayaking, Frank Mac Lochlainn, Howth Yatch Club and Raja Maitre the Howth Harbour Master for all the advise on the waters that surround Lambay Island.
Thanks to John Caren who jumped in the sea numerous times with his wetsuit, fins and waterproof camera to film the swim.
Fergal, Teena and Catherine were a crucial part of all three swims for this project and it couldn’t have happened without them.

The Lambay Trilogy started in 2014 with the “Lambay Swim – A Collaborative Journey” made with the sea swimming community from Malahide as part of the Artist in the Community Award, this was followed on the next year with the “Lambay Solo Swim Expedition” as part of the Parity Studio’s Residency in UCD and the third and final swim was the “Lambay Island Circumnavigational Swim”. The final stage of this project will be an installation and publication, this is work in progress.

More photos on this link: https://flic.kr/s/aHskHfy64W 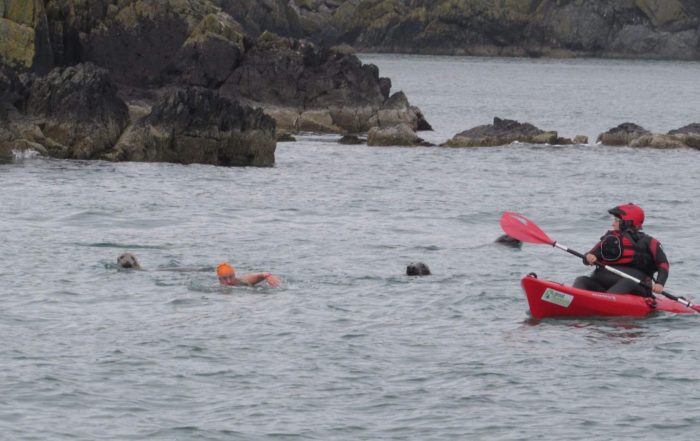 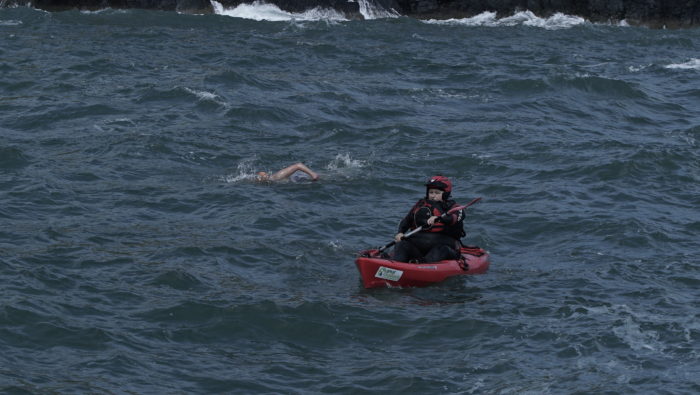 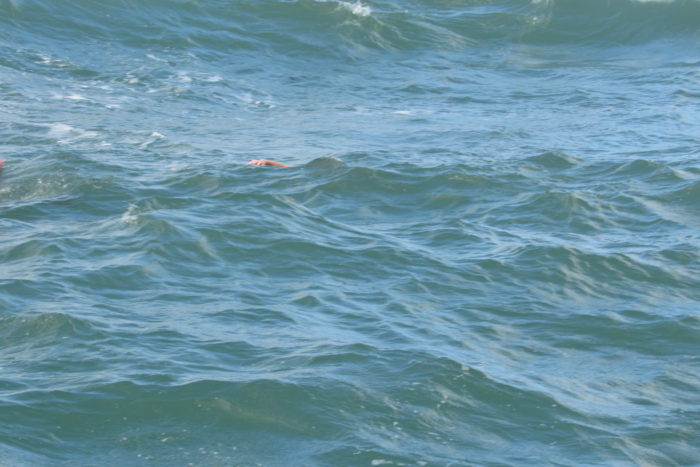 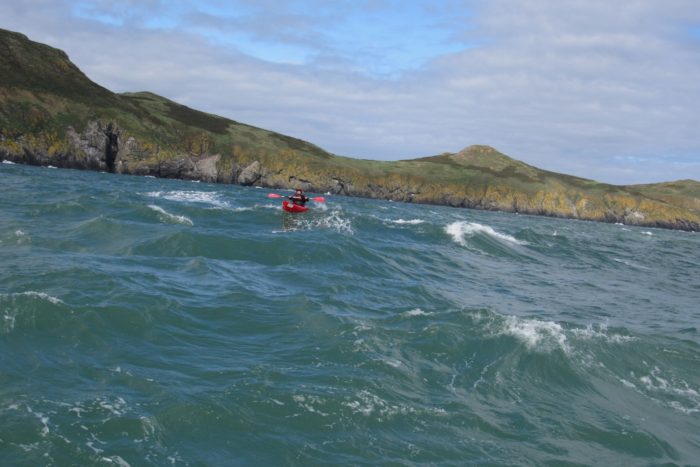 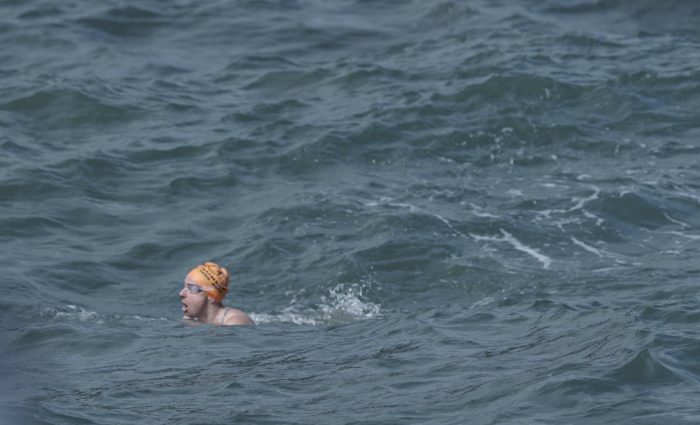 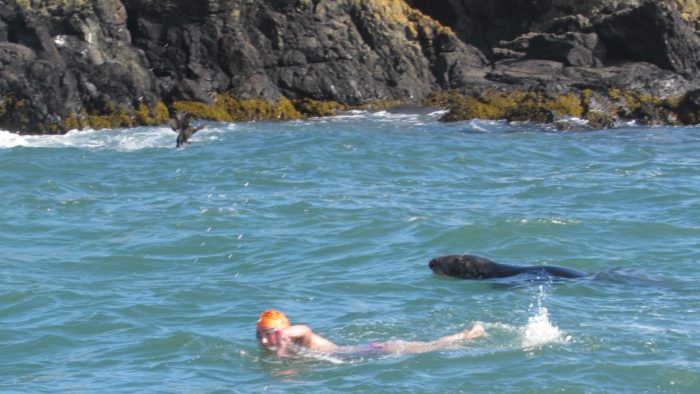 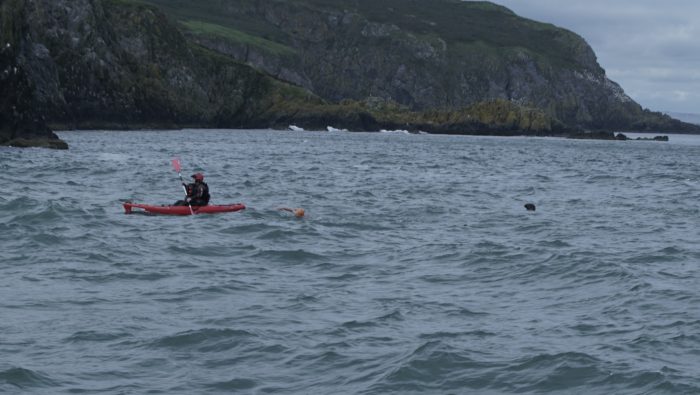 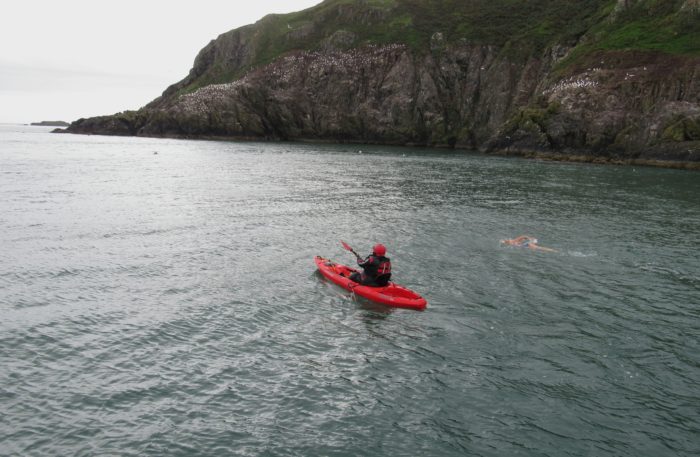 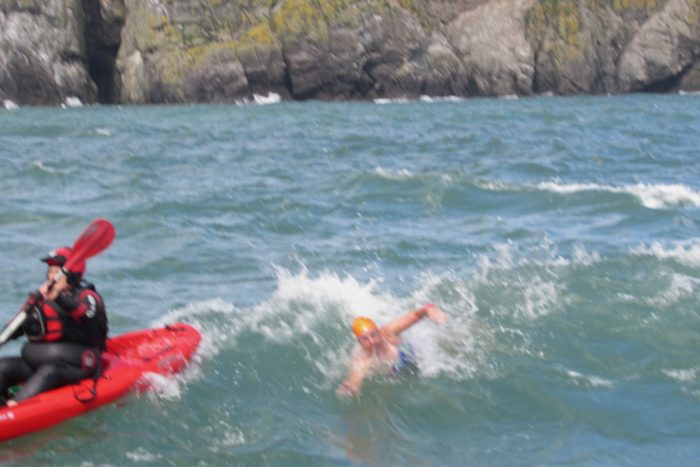 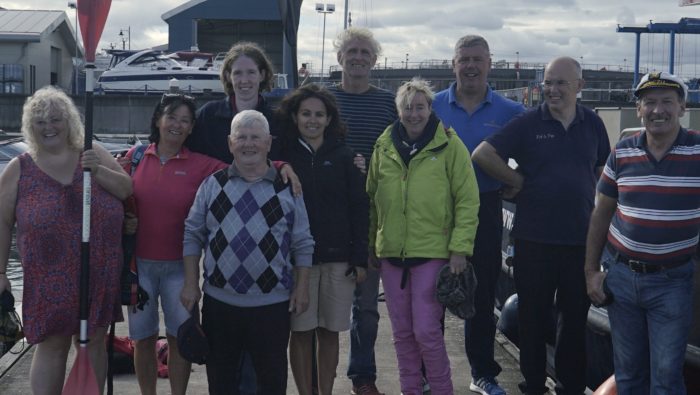